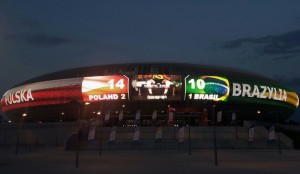 The Krakow Arena features an amazing circular metal latticework façade that is 18,000 square meters and is among the most incredible architectural structures in Europe. ColosseoEAS took the opportunity to put up one of the most innovative lighting displays in the world! They attached aluminium stays to the latticework façade and then fixed 5200 square meters of LED strip lighting to preserve transparency and create a unique design.

Where the strips are the densest though, just over the main entrance to the arena, is where the 54 meter by 10 meter “main screen” is located. This amazing screen and the LED strip fasciae are both controlled by Colosseo’s third generation 16-channel HD Director, the same system that controls Colosseo’s full HD 360 degree video cube inside the stadium.

Installation took 3 months of work and involved more than 80 engineers and climbers. ColosseoEAS used more than 80 tons of aluminium and 80,000 screws.
www.krakowarena.pl/en/