The Royal Opera House Muscat (ROHM) is Oman’s premier venue for musical arts and culture. In 2011 it became the first opera house in the world to be equipped with a multimedia interactive display seat-back system named Mode23, an award winning technology designed by GP Smart Stadium’s partner Radio Marconi. 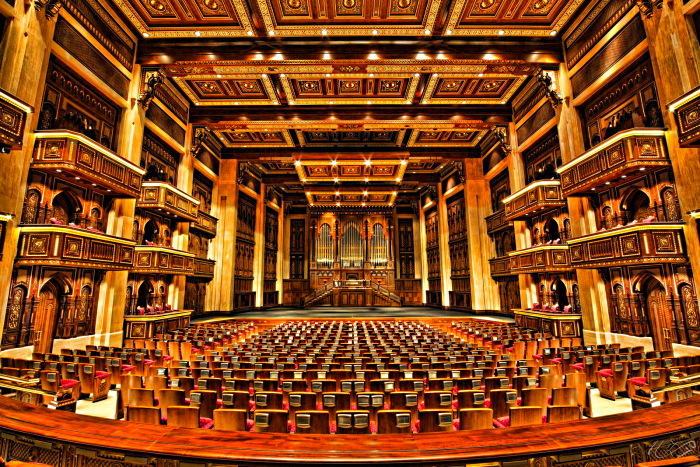 In 2001, the ruler of Oman, Sultan Qaboos bin Said Al Said ordered the building of an opera house. It was built by the famous Carillion Alawi Construction Company and became the first in the world equipped with Radio Marconi’s multimedia interactive display seat-back system, Mode23. This unique seat-back system which was integrated in all the 1.100 luxurious theatre seats was awarded as the Most Innovative Business Impacting Network of the Year during the Cisco Innovation Award 2011. This award confirms the success achieved by the company with its innovative interactive multimedia solutions. “Radio Marconi’s “Mode 23” is first in the world revolutionary system that turns any cultural and entertainment event into a live multi-media experience that captures the user’s attention, involvement and enthusiasm thanks to the interactive touch screen devices integrated on the seat back. Each user can choose among several video channels and select a simultaneous translation audio and text in their own language with voting and survey capabilities. Furthermore, each user can decide to visualize specific customized contents or information about the event and the sponsors and also directly make purchases through an integrated credit card reader. The systems designed by Radio Marconi represent a first-to-market example of sustainable technological integration aimed to transform the standard Sport, Cultural, Conference & Entertainment venue into a reliable multi-content point of experience for the audience.
The Royal Opera House Muscat was officially opened on October 12, 2011 and is expected to bring together multiple strands of creativity and innovations in both architectural form and structural design. It will be part of a new urban center and will represent one of the most important cultural venues of the Persian Gulf area